We’ve been doing some work with Delhi on COVID response and thinking a lot about positivity rate and optimal testing. Say you want to catch the maximum number of positive cases but you have no idea what the positivity rates are in each ward within the city but you expect wards close to each other to have similar rates. You have a limited number of tests. How do you optimally allocate these to each ward to maximise the number of positive cases you catch?

A lot of this is theoretical since IRL you are constrained by state capacity, implementation challenges, and politics 1. But I hope that doesn’t stop you from enjoying this as much as I did.

Notebooks are up here if you want to muck around yourself.

The problem above can be cast as a multi-armed bandit (MAB), or more specifically a Bernoulli bandit, where there are $W$ actions available. Each action $a_w$ corresponding to doing the test in a ward $w$. Reward is finding a positive case and each ward has some unknown positivity rate. We need to trade off exploration and exploitation:

TS uses the actions and the observed outcome to get the posterior distribution for each ward. Here’s a simple example with 3 wards. The algorithm goes as follows:

For more information, see this tutorial.

Here’s a quick simulation that shows TS in action. We have three true distributions, all with the same mean value of 0.5. 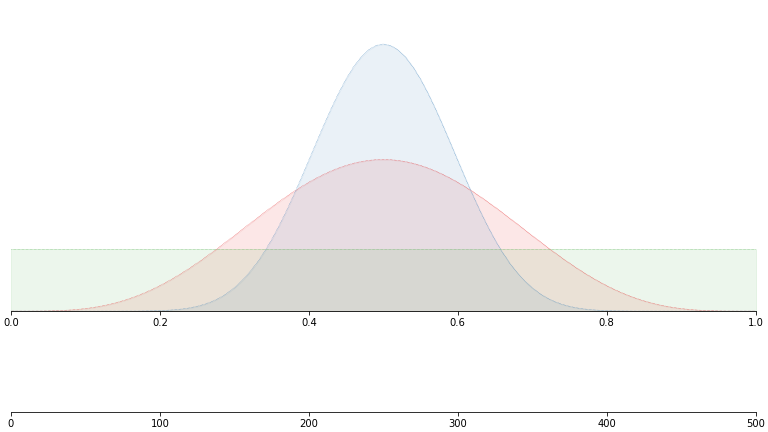 But we don’t see these. We’ll just construct a uniform prior and sample as per the algorithm above:

If you want to play around with your own distributions, check out this notebook.

Back to COVID testing

We can now do Thompson sampling to figure out which wards to test in but there is one more complication. In step 5, we update the parameters for just the ward where we sampled. But since neighbouring wards are similar, this also tells us something about those. We should really be updating their parameters as well.

How do we do that? How similar are neighbouring wards really? We’ll use our old friend gaussian processes (GPs) to non-parametrically figure this out for us.

For example, let’s say the true prevalence is as follows: 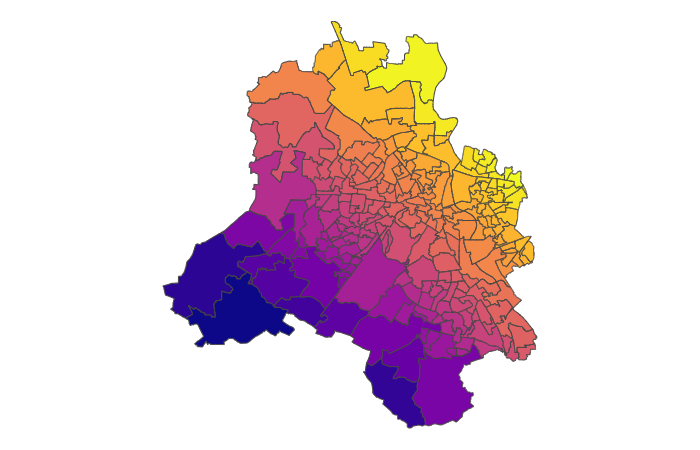 And we take varying number of samples - somewhere between 100 and 1000 for each - and then calculate the prevalence by just looking at number of successes / number of trials. 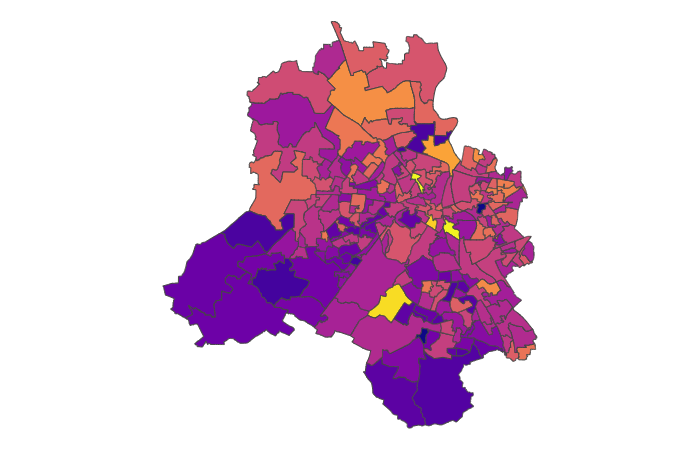 Pretty noisy. There is that general trend of high positivity in the north east but it’s not that obvious.

I won’t go into the theory of GPs here. Check out these previous posts is you are interested:

In brief, we assume that wards with similar latitude and longitude are correlated. We let the model figure out how correlated they are.

and now the model:

Note that we are fitting two latent GPs - one for latitude and one for longitude. This assumes that they are independent. This might not true in your data but it’s a fine approximation here.