David McKay’s Information Theory, Inference, and Learning Algorithms, in addition to being very well written and insightful, has exercises that read like a book of puzzles. Here’s one I came across in chapter 2:

McKay doesn’t directly provide a solution but instead cheekily just presents you with an analogous problem and tells you to go figure that one out.

Imagine that the buses in Poissonville arrive independently at random (a Poisson process) with, on average, one bus every six minutes. Imagine that passengers turn up at bus-stops at a uniform rate, and are scooped up by the bus without delay, so the interval between two buses remains constant. Buses that follow gaps bigger than six minutes become overcrowded. The passengers’ representative complains that two-thirds of all passengers found themselves on overcrowded buses. The bus operator claim, “no, no - only one third of our buses are overcrowded.” Can both these claims be true?

Jake VanderPlas also had a great post recently looking at the bus example in real life. He summarizes the inspection paradox quite nicely:

But how does that relate to our problem? The bus example makes sense but who are we oversampling here? What’s the unrelated clock event got to do with the die throw? It wasn’t clear to me that this was even true. So I took Sir Francis Galton’s advice.

“Whenever you can, count.”

Simulation can lead to a lot of insight. You are forced to make a lot of your assumptions explicit and that reveals the mechanisms that may not have been immediately obvious.

Let’s setup some dummy data. Here is a function for a roll of the die. It’s just a wrapper around numpy’s randint function.

Let’s make sure we didn’t screw anything up. We expect to see a uniform distribution since that’s what throwing an unbiased die is: 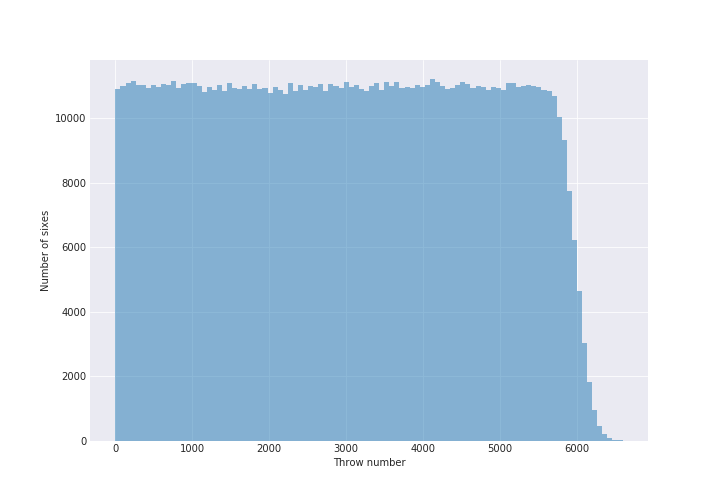 Looks pretty good. The tail there is because we asked for 1000 sixes so some of the simulations took longer to get it. You could instead run the simulation for “t” seconds (or throws) and that would give you a nice looking boxy histogram.

Next, let’s see what the number of throws between sixes, or the wait times since we are throwing once per second, look like: 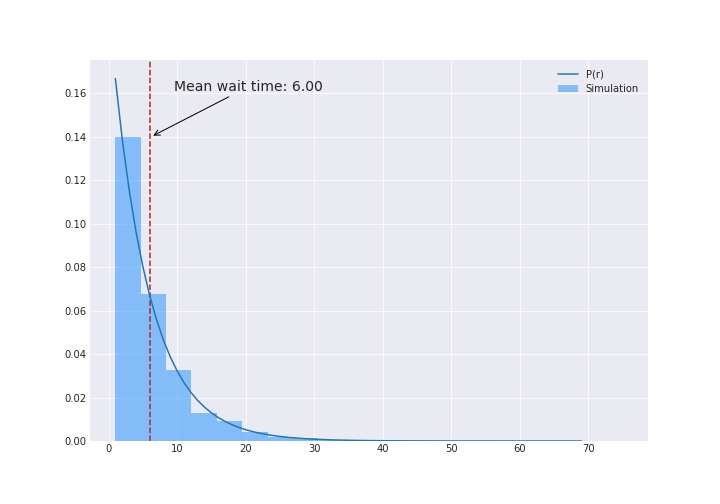 There’s the solution for (a). If you wanted to figure out what that distribution is, that’s easily enough. We know that probability that it take $r$ throws is the probability that we get something that is not a six for $r-1$ throws and then a six:

The blue line in the figure above shows this function.

As per the exercise, let’s say that the clock strikes between two throws at some time $X$:

Note that $X$ is not really a random number (it happens at 1PM!) but to convince myself that this phenomenon is real, I ran this a number of times with different $X$s.

Let’s calculate the window around when the clock strikes: 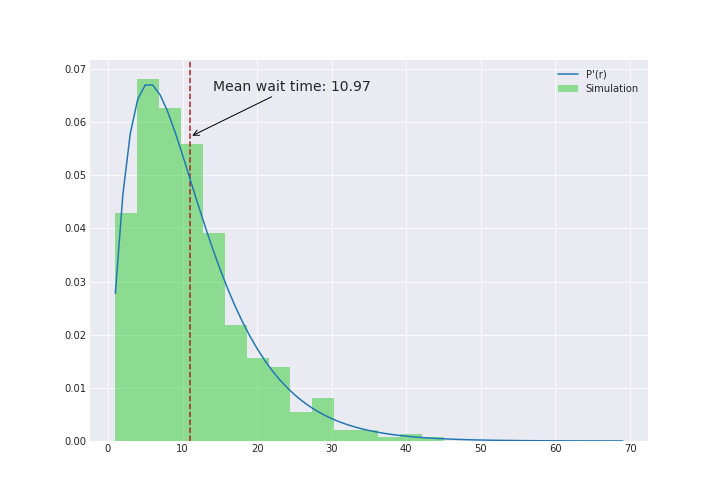 So whats going on?

Here’s the CDF of the two windows above and we see that the window around the clock strike is indeed longer. 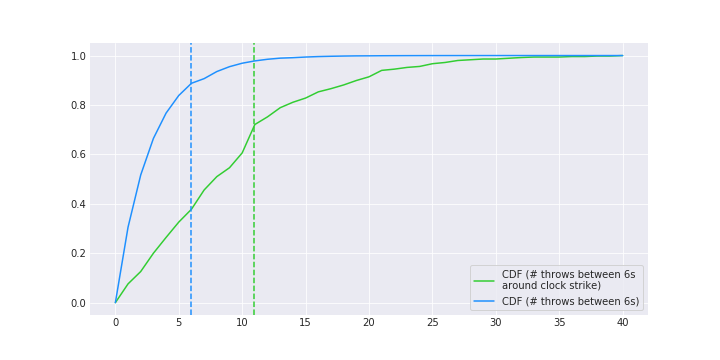 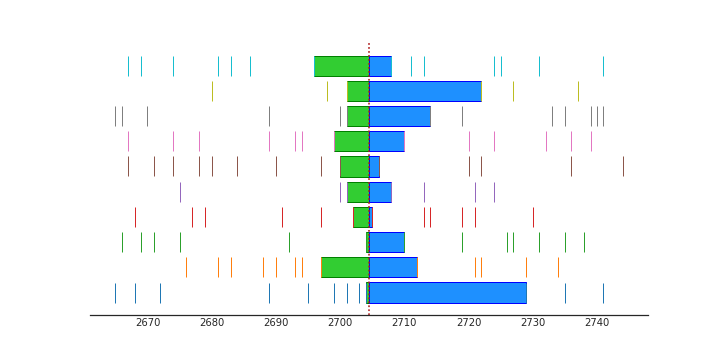 The mean window between sixes in just this sample shown is 5.9 and the mean of the window around the clock strike (green plus blue) is 11.9 rolls. We see that clock strikes seem to be in wide windows i.e. there is a large gap between sixes. So something similar to a the bus example is occuring.

The clock strike is more likely to occur between large gaps. It hurts my head to think about it this way since clock strike is predetermined (it strikes at 1). It’s not a random variable. But the way to think about it is that there are more events happening in large windows. Not just the clock striking but the dog barking, phone ringing, baby crying. There are just more seconds in those longer gaps for things to happen. So when looking from the perspective of some event occurring, it appears that the window is wider than average.

This is the blue line in the figure in the previous section and we see that it matches our data quite well.

If all this still makes you feel woozy (from the perspective of some unrelated event, the gaps between sixes is almost double) but the Poissonville bus analogy makes intuitive sense to you, hopefully drawing parallels between them will help:

The notebook can be found here. You should also check out Jake VP and Allen Downey’s blogs mentioned above.

I need to get back to McKay’s book. So many more fun puzzles to solve!