So economic convergence is back. Dev Patel, Justin Sandefur, and Arvind Subramanian (PSS) recently wrote a blog post to show that

They do a very straightforward analysis; they regress real per capita GDP growth rate on the log of per capita GDP for various periods and show that the coefficient is indeed reducing. They also made their code available, which is so awesome that they can be forgiven for it being in STATA. Instead of doing separate regressions for each time period, I redo their analysis as a rolling regression where we allows the coefficients to change over time.

As per usual, you can find the notebook on github.

Key figure in the chart is this: 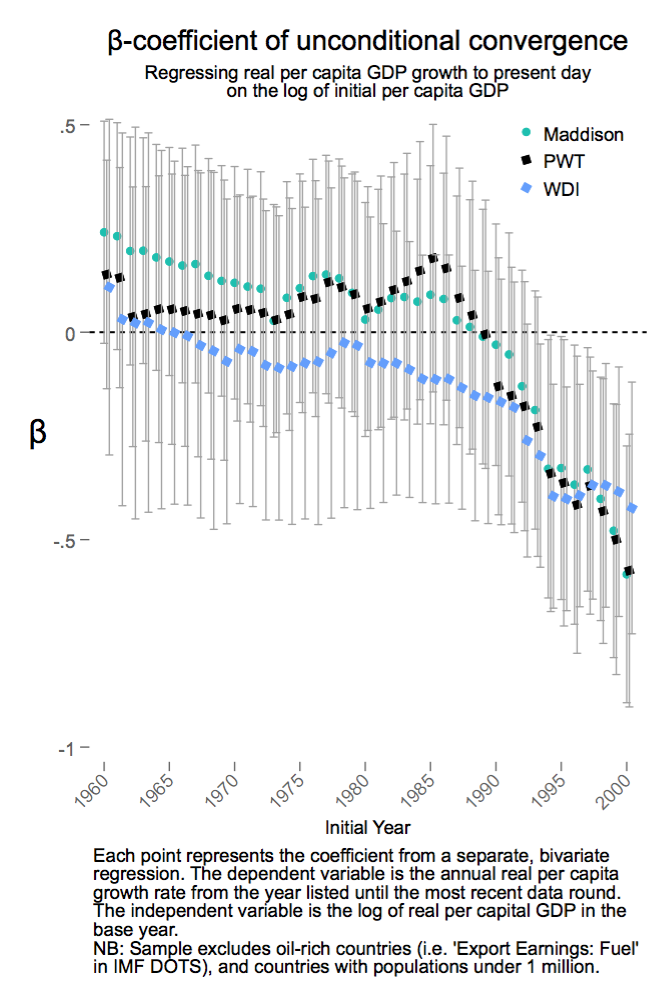 So for each time period between $y$ and $y_0$, we have different coefficients as follows:

Going forward we will drop $y_0$ from the notation for clarity.

We can make this explicit and put a gaussian random-walk prior on beta.

$\sigma^2$ is how quickly $\beta$ changes. It’s just a hyper-parameter that we’ll put a weak prior on. We do the same thing for $\alpha$ as well.

In the notebook, I tried replicate PSS’s STATA code in python as closely as possible. It’s not perfect. And looks like I screwed up the WDI dataset manipulations so I use only Penn World Table (PWT) and Maddison Tables (MT) in this post. Check out the notebook if you want to fix it and get it working for WDI.

The trend might not be so obvious in 1985 but it does appear to be negative in 2005, especially if you ignore those really tiny countries. Let’s see what the random walk model says.

Here’s the model in pymc3 for MT. The code for PWT is pretty identical.

and let’s run it:

Let’s see how alpha and beta change over the years. 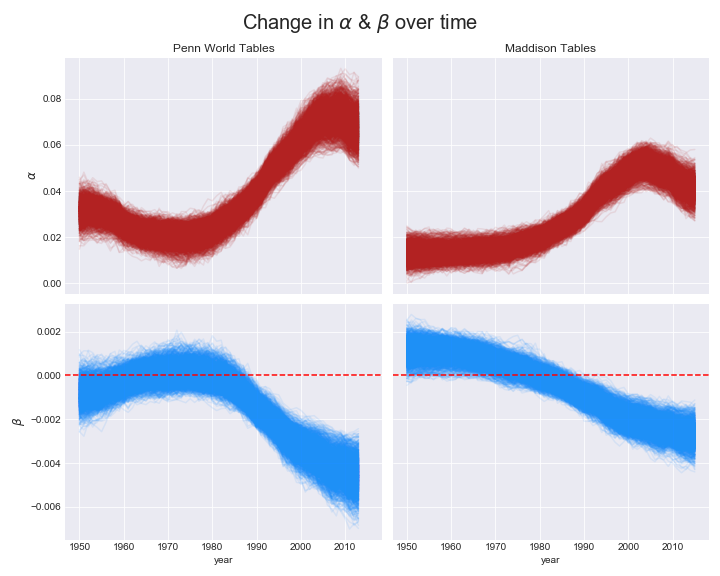 So, PSS’s conclusion is borne out here as well. We see that $beta$ used to be mildly positive and gradually shifted to negative in recent years. Our bounds look a little tighter and maybe the shape is slightly different. You can check out the notebook here. I threw this together pretty quickly so I might be screwed up the data setup. Let me know if you find any errors in my code.